Mike first began expressing his love for birds and wildlife in elementary school by sculpting a series of animals out of clay, then firing them in a kiln. It was during this time, while growing up in the untouched desert areas around Scottsdale, Arizona, that he began a lifelong passion of wildlife observation and study.

He went on to receive his Masters of Science degree from Fort Hays State University in wildlife studies with an emphasis in Ornithology. While at Fort Hays, Mike completed his first waterfowl carving, a Northern Shoveler, out of Basswood. After completing a series of songbird and waterfowl carvings, Mike switched to sculpting in clay and began to cast his first series of bronze compositions of birds and animals in Loveland, Colorado.

Living in Loveland has enabled Mike to learn the bronze casting process and today he is involved in the finishing of each bronze sculpture. Mike's realistic works of bronze can be found in both private and public collections throughout the United States, Canada, Australia, Europe, Puerto Rico, England, Ireland and Saudi Arabia. He has been honored with both People's Choice and Juror's Awards for his beautiful life-like bronze sculptures.

A large collection of unique bronze doorknockers are a new dimension of Mike's work, and he is now sculpting custom doorknocker designs for his clients.

You can find Mike's work at his studio, in Loveland, Colorado; his gallery locations; or, at the fine art shows where he exhibits around the country. Please contact him for further information and commissions.

Foremost, Mike honors his Lord and Savior,
Jesus Christ, for the artistic gifts he has received. 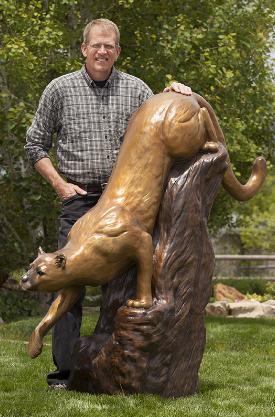